Truth is, it’s not the mountain biking that the common man has come to experience in recent years. When I started mountain biking, there wern’t any mountain bikes. Mountain biking was riding trails we were accustomed to hiking and running, with a Schwinn ten speed with straight bars. When we didn’t have to walk half the time, that was considered surprising.

Mountain biking at the OPUS is rugged-mostly. We have a couple cruiser loops that are pure riding joy without any hike-a-bike. Otherwise, the riding involves lots of pushing, carrying and even dragging your “ride”.

The rewards are worth the extra effort. Cruising alpine trails for miles with open vistas and scenery unmatched in Moab or Fruita. Trails with hundreds of feet of exposure-keeps the blood flowing. Stopping at alpine lakes for a swim.

So, come on up and try the traverse to the hut from Black Bear Pass, try the crossing over to Bridal Veil basin, then down to Telluride. If you like real mountain biking, you’ll be back for more. One group has been back seven times to try new alpine trail combinations. The options are endless.

The Paradox of the Backcountry Ski Hut

As skiers we live with the paradox of thriving on what has the potential to kill us. This is not a diminutive fact; and out of this lives a smaller but important dilemma–the paradox of the backcountry ski hut. The backcountry ski hut requires inclement weather for its survival. And yet when this weather rolls in so do the cancellations. The very same thing that keeps us prosperous as a business has potential to bring us down when people decide that the thing they visit huts for–powder– is the reason they decide to cancel. It’s too much, it’s not the right kind, it’s all over the roads, it’s blowing too hard. We hear it all. 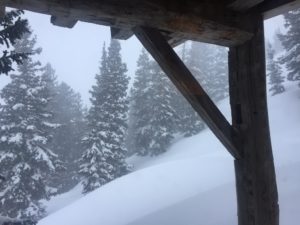 Our policy at the Opus Hut is that if the avy danger is high a free transfer of dates is guaranteed. We do not offer refunds for lower danger. This is our policy because we are a business. We provide jobs, and we provide good times (we hope) to those who are willing and able to assume some level of risk and responsibility.

We do not want to sound callous. The last thing we want is to put lives in danger. Backcountry skiing involves some degree of risk and when we book a hut trip and sign that waiver we are assuming a level of danger, and unpredictable weather–because this is Necessary for our sport, and backcountry hut skiing is extreme. It is scary and unpredictable, but also adventurous, dynamic, and sensuous. It is a paradox; one whose followers must respect in order to keep viable for all who would like to engage in it. 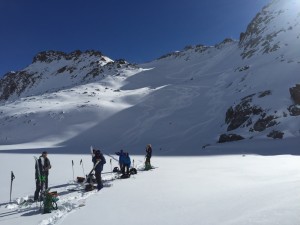 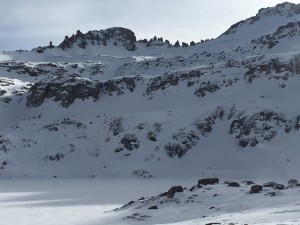 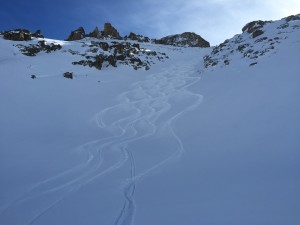 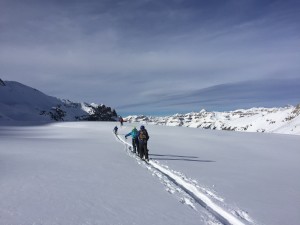 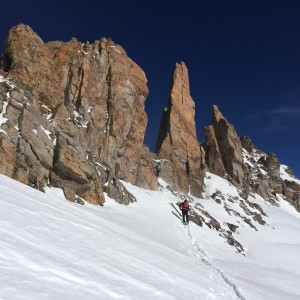 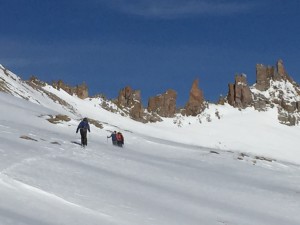 Climbing directly north out of the OPUS and over to Columbine Lake. Then traverse the Mill Cr. Basin north to the rock towers at the Columbine – East basin Col. Drop several terraces to Blue lake , then exit Bridal Veil Creek past Bridal Veil Falls to the Pandora Mill and Telluride.

With the early season snowpack just above average, we’re looking good for the coming season. Early storms have left up to four feet of base in the Northern San Juans, and conditions are already great. 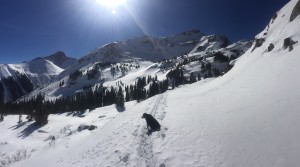 Big talk of big snow and the seasons have definitely turned. Foliage peaking soon and first snows should be just around the corner. 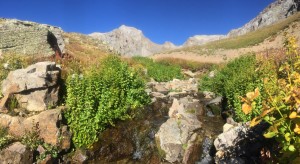 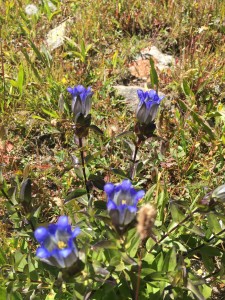 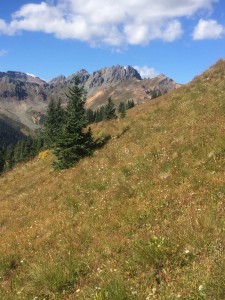 The lakes are still icy and the flowers are just getting started in the Alpine. 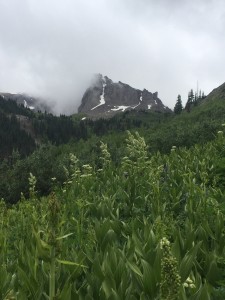 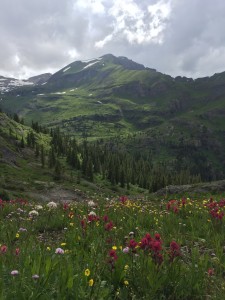 The snow is going fast up high and gone on the sunny slopes. The wildflowers are within two weeks of peak color.

There are a few spaces available for this weekends yoga/ hiking retreat, contact us at info@opushut.com 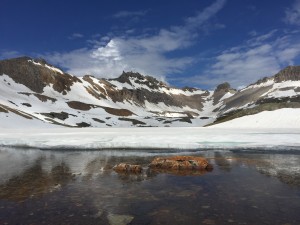 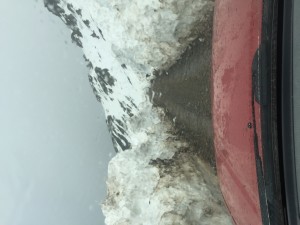 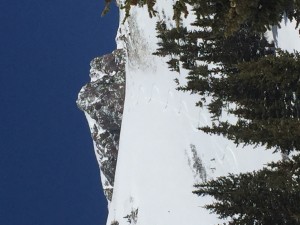 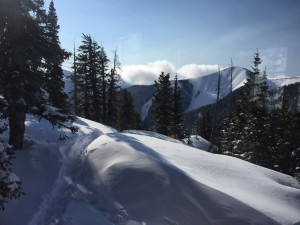 As usual, April snows have produced some of the best powder skiing of the year !