THE USUAL FALL ANTICS AND SOME NEWS

The Usual Fall Antics and Some News

New at the OPUS this winter – Beverages !

Yes that’s right folks ! Beer, Wine, and a limited selection of Spirits will be available for purchase at the hut. 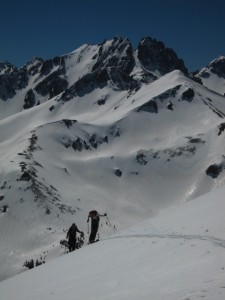 It’s been a long fall. There is a couple feet on the shady side and tracks on the north side of the battleship. A fine mix of hard and soft wood firewood was flown in and many cases of beer carried in Sherpa style. As the sky turns gray I’m hoping my next trip is on skis not chains.

The last commute was fairly rugged, chains on all four wheels, snow flying over my hood. The immortal words of Yukon Steele in my head, “just keep the RPM’s up and nothing can stop a Toyota”. My poor mule, front end, bearings……it’s been a long summer. Got back in to drive her down and – no four wheel drive, a surfy ride down. Thought I had just spent my fun tickets…turns out the Marmots just wanted one last fall meal of  Toyota wiring.